Dual-language program to expand into middle school this fall 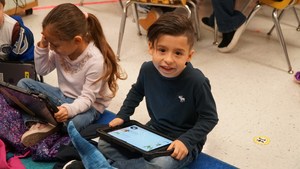 5th graders set for graduation ceremony May 22 at UTRGV

McAllen ISD’s popular Dual Language Program will expand to the middle-school level this fall, providing a seamless transition for students to strengthen their biliteracy.

The program, which trains students to read, write and speak in two languages, English and Spanish, is so thorough that fifth-graders will actually earn a high school foreign-language credit before they step foot in middle school.

The first group of fifth graders, who will continue into dual-language classes at Fossum Middle School this fall, will participate in a Dual-Language Cohort Graduation on Tuesday, May 22, at the University of Texas Rio Grande Valley.

“These students will be graduating (fifth grade) with a Spanish I credit for high school,” Angie Martinez, McAllen ISD’s Bilingual, ESL and Foreign Languages Director, said. “So as they move into middle school, they will be taking their Spanish II in sixth grade, Spanish III in seventh grade and Advanced Placement Spanish in eighth grade with the end goal of them continuing into high school.”

The participating students are from Jackson and Sanchez elementary schools. These students have been in the dual-language program since pre-kindergarten.

UTRGV’s Center for Bilingual Studies, in partnership with PUEDE (Parents United for Excellent Dual Education) and UTRGV’s B3 Institute, will host the graduation of this first cohort of dual-language students. The event begins at 6 p.m. on Tuesday at the Student Union on the UTRGV campus in Edinburg.

“This is a historic moment for UTRGV, which supports the goal of graduating students who are fully bilingual, bicultural and biliterate,” according to a UTRGV news release.

Parents are excited about the district’s plan to expand the dual-language program to middle school.

“They’re extremely excited,” Martinez said. “To them, it’s a dream come true. We do have constant phone calls as to ‘can you please place us on the waiting list to get into a dual-language classroom?’ Now that they know their students are going into middle school, we are having a lot more calls.”

“PUEDE has been organizing Valley parents interested in dual-language education since 2016,” according to UTRGV. “Parents from RGV PUEDE and McAllen PUEDE are co-hosting the celebration to support dual-language instruction. They say bilingualism goes hand in hand with the joy and pride of being bicultural and biliterate.”